By: Hillary L. Presecan -Administrative and Collections Assistant for INDIAN MUSEUM OF NORTH AMERICA® at Crazy Horse Memorial. If you were to ask folks around Pine Ridge Reservation, at local art and cultural centers, or at any community event about Nellie Two Bulls, many would smile and share a heartwarming story on how “Grandma Nellie” shared Lakota songs and cultural traditions with them, and how much of an impact her knowledge made in their lives.

Nellie Two Bulls, also known as Zintkala To Win (Blue Bird Woman) lived for over 79 years on the Pine Ridge Reservation fulfilling the vision she had of giving the gift of songs and stories and doing her part in preserving the Lakota culture. As a direct decedent of Chief Man Afraid of His Horse, she became a strong Indigenous voice for her people and her culture.

Nellie Two Bulls taught at the Red Cloud Indian School for over 20 years. She was a board member for KILI radio and a Tribal Council member representing the Wakpammi District.  She was on the advisory board for Journey’s Museum in Rapid City where her holographic image is featured in a storytelling exhibit.  Rapid City named a day after both her and her husband, Matthew.

Along with her impressive record of serving the community and her people, Nellie has been honored through awards from numerous organizations to include “The Northern Plains Tribal Arts,” “A living Teaser Award,” a lifetime achievement award from “The Black Hills Pow Wow Association,” an Honorary Doctorate Degree from the Oglala Lakota College and a “First People Fund Spirit Award.”

Nellie was quoted in the WOLE (link below) describing her art form as being given the “Ability to sing and tell stories about my people, the Oglala Lakota. I have spent the majority of my life telling stories, and singing the traditional songs. This is my contribution to preserving our culture.”

Nellie was a friend to the Ziolkowski Family, and a close friend of Ruth Ziolkowski. Ruth said, “Nellie was a remarkable lady and an inspiration to people and to me personally”. Nellie and her husband, Matt, were among the first true friends of both Korczak and Ruth Ziolkowski. The spirit of their lasting friendship is still felt today by the people who work at the Indian Museum of North America at Crazy Horse Memorial.

Though Nellie left this world in February 2007, her spirit lives on through the lives she touched and through the songs and stories she left behind from which future generations share, learn and grow.

In honor of Nellie, THE INDIAN MUSEUM OF NORTH AMERICA® has on display a handbag created by Nellie herself, and a watercolor portrait of Nellie by Vic Runnels. This watercolor is titled, “The Blue Bird Woman,” it captures the spirit Nellie possessed when sharing her culture with the world around her. These items are located in the Old Wing of the Museum next to the bead display before entering the gift shop. Learn more about Nellie at:  http://www.oyate.com/nellie-two-bulls—oglala-lakota.html, http://www.wole.org/TwoBullsMem.htm and http://www.brotherhooddays.com/Nellie.html. 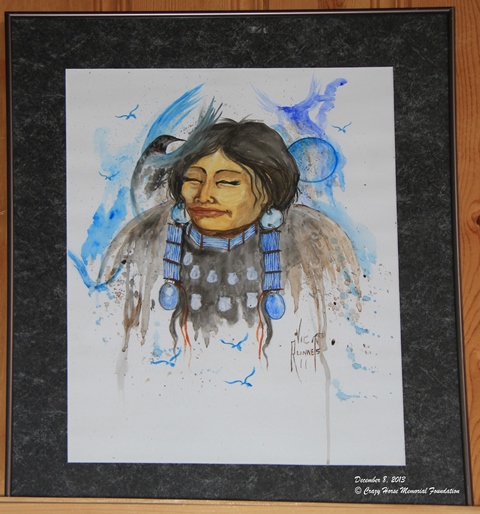