The rich and vibrate culture of the Western Apache people is one that can be told through the delicate detail of every woven basket created by hand from an Indigenous culture which passed down the tradition of weaving from one generation to the next.  Basket weaving is one of the oldest created goods developed for the basic need for storage, carrying supplies, hunting, and fishing.  Baskets were also used for religious ceremonies.  One can become mesmerized by the material, style, pattern and shape of each basket and how every object in a collection tells its own story to every person who spends time with it. The Brunk Collection at Crazy Horse Memorial’s INDIAN MUSEUM OF NORTH AMERICA® provides visitors an enriching museum experience and all are invited to view the unique Collection.

The United States Government placed Indigenous tribes, like the Western Apache, onto reservations where they struggled to survive.  Regardless, they kept their Indigenous ways alive through my different avenues of the arts, one being basket weaving.  The Apache used baskets for many practical purposes, and baskets continue to play an important part in the ceremonial life of the White Mountain Apache, serving as a traditional link to an earlier way of life.

At the University of Arizona, the Arizona State Museum’s exhibition, “Basketry Treasured,” created by Diane Dittemore, the Ethnological Collections Curator at the Arizona State Museum, said basket weaving in Indigenous cultures was “trying to find ways to make a living and also to stay in touch with their cultural background and their artistic roots providing a kind of anchor for the community.” Dittemore went on to say the collection at the Arizona State Museum was mostly “made during the time when the reservations were being set up, so one’s basket making turned more into a craft for an outside audience,” and this movement toward an outside audience is known throughout most other Indigenous cultures throughout the United States.

The Western Apache basket has a unique style and design that sets their work apart from other Indigenous cultures. The Smoki Museum describes how Apache baskets tend to use distinct Western Apache basketry stating, “contrasting colors and geometric or pictorial designs”. The traditional ones are very sturdy [because of the three coils] and the external weft is usually willow with material from devils claw seed bags for the dark color.  The willow tends to start as an off white but ages to a golden tan or light brown.  A sun-burnt willow that is darker and reddish was sometimes used for decoration. Dark red yucca root was also used for design work in rare occasions. Those baskets that added an extra color are called polychrome.” The more modern-made baskets are sometimes twined and use more materials than their ancestors. Examples of new materials being used are cottonwood, berry bushes, and sumac as well as willow. Modern-made baskets and dyes have more color.

There are two dominate styles of basket weaving that the Western Apache people are known to create called coiling and twining.  Coiling, as The Museum of Anthropology describes, “Coiling consists of sewing a stationary horizontal element (the foundation) with moving vertical elements (the stitches). The stitching and bindings on coiled baskets can be decorative, purely functional, or both,” and “Twining consists of passing horizontal elements (weft) around stationary vertical elements (warp). Specifically, it is a technique in which two wefts cross over each other between warps.” Coiling has faded in popularity and twining became more of the popular style due to its ceremonial use for the Western Apache people.

The donor, Mr. John C. Brunk, graciously donated the Western Apache bi-chrome basketry collection to Crazy Horse Memorial Foundation.  Brunk shared how his family collected these baskets and it began with his Great Grandfather, Dennis Murphy, who was an Irish Immigrant who came to the United Sates during the time of Land War back in his homeland.  He settled in Globe in the Territory of Arizona. He purchased land, married and had a family. While living in Globe he developed the Wine Glass Ranch N.E. and befriended many Apaches by providing them with beef.

In his diary, Murphy mentions a time when one of his vaqueros found an Apache scout for Geronimo with a broken leg from a fall. The ranch hand brought the scout to the main home and after nursing him back to health, sent him on his way on the scout’s horse. A few weeks later, the scout returned and told Murphy that his “boss” Geronimo, was on the war path and all should leave- all left the area, cattle were moved and no damage came to Murphy’s family or their belongings.  Murphy opened meat markets and owned a livery stable and extensive mini properties in Gila County. The old Murphy Hotel still stands to this day.

Murphy came about owning this collection of Apache baskets through trading with the Apaches in exchange for food and sundries and he kept the collection within the family and it had been passed down two generations until Brunk and his family donated these pieces to the Crazy Horse Memorial Foundation to be showcased within the INDIAN MUSEUM OF NORTH AMERICA(R), where they have been on display at the front entrance of the museum. The Brunk’s donation to the permanent collection of the INDIAM MUSEUM OF NORTH AMERICA® helps the Foundation fulfill its mission to celebrate the culture and heritage of the Native people of North America.

To learn more about Western Apache, and other Indigenous weaving cultures throughout the United States, please check out the University of Arizona YouTube page and Arizona State Museum website as well as their blog.  Also the Smoki Museum. To learn more about the Apache people, please go to the following link. 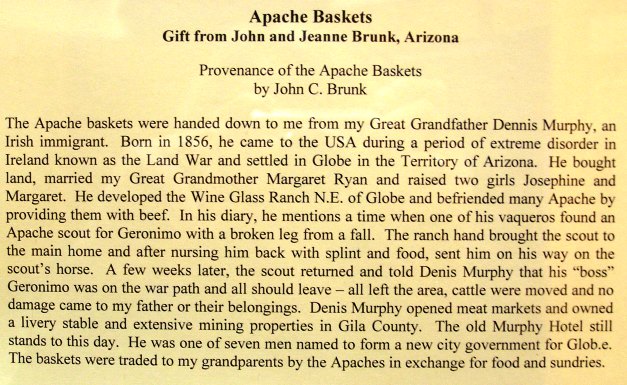