The Sherman Collection: History of Life on the Plains Article

The Sherman Collection: History of Life on the Plains
By: Hillary Presecan
Administrative and Museum Technician Assistant INDIAN MUSEUM OF NORTH AMERICA ®

The history of the Sherman family begins with Frank Sherman and Lizzie Glode. Frank was of Ponca, French Canadian, and German descent. His wife Lizzie (Rattle White) Glode, born in 1888 in Pine Ridge and whose second father was rumored to be Kills a Hundred, was Oglala Lakota and French Canadian. Frank and Lizzie experienced the traditional milestones throughout their marriage as residents on the Plains. They built a homestead, had children, and raised livestock as a source of income. However, like every family, additional family lore passed on from generation to generation made their life story more interesting. One such experience for Frank and Lizzie Sherman was their connection to Buffalo Bill. On two occasions throughout their lives, Frank and Lizzie went on tour to Europe with Buffalo Bill and his Wild West show where they had an enjoyable time meeting European people and experiencing various cultures.

The Sherman Collection at the INDIAN MUSEUM OF NORTH AMERICA ® of Crazy Horse Memorial Foundation was donated by the Christensen family who were descendants of the Sherman family. They wished to donate the collection in order to tell the story of their family, comprised of both Indigenous and non-Indigenous descent, living on the Plains during the late 19th to early 20th centuries. The Sherman family legacy is told through family photos, genealogy, and a personal scrapbook journal created by Raymond Christensen, grandson of Frank and Lizzie Sherman and son of Hans and Rosalie Christensen (eldest daughter of Frank and Lizzie Sherman).

The Museum began acquiring the Sherman Collection in 2009; the late Ruth and Anne Ziolkowski worked closely with the Christensen family to research, collect, and create a proper display of their rich family history of life in this region of South Dakota. Patsy (Christensen) Knapp, daughter of Raymond Christensen, emailed Anne Ziolkowski in 2010 telling her how comforting it was to know their artifacts would be preserved and on display for others to enjoy. She only wished her parents were still alive to see this display. Pasty went on to say that, "I am sure my father would be pleased since it was his wish that these artifacts be donated to the museum in memory of him and our mother." Along with the journal scrapbook that Christensen donated, the Museum also received two Sioux fully-lined, beaded purses with metal clasp closures. One has a white lazy stich beaded background with multi-colored geometric designs measuring 8" high x 10" long, circa 1890-1910. The other purse has a blue-beaded background with multi-colored geometric designs measuring 4 ¼" high x 7 ¾" long, circa 1930's-1940's.

Another item in the Sherman collection is a Sioux child's fully-beaded ball for the "Throwing the Ball" rite. It features multi-colored beads and a 9 ½" circumference, circa 1890's-1910. Also, a Sioux full-beaded awl case is also another object in the Sherman Collection; it has a salt and pepper design with a beaded-top flap cover and tin cone and horse hair dangles at the bottom, circa 1910-1920. The four objects described above are examples of the multiple artifacts donated by another decedent of the Sherman family, Fran Eilchinger.

One of the most eye catching pieces of the collection is the portrait of Lizzie Sherman which was given to Crazy Horse Memorial by Geraldine Sherman of Rapid City, granddaughter of Frank Sherman. The portrait is hung next to the display case including other objects donated by the family. This portrait, donated in 2012, is the most recent donation from the descendants of the Sherman family. The portrait was created by Geraldine's daughter and Lizzie Sherman's great-granddaughter, Colleen Cutschall. Colleen is a retired professor of Brandon University in Manitoba who has exhibited works at the National Museum of the American Indian. Moreover, she designed the "Spirit Warriors" Memorial at the Little Bighorn Battlefield. The portrait is based on a photograph of Lizzie at age 18 in her beaded buckskin regalia. Crazy Horse Memorial Foundation considers it an honor to have Cutschall's art on display in recognition of her family legacy.

Readers are encouraged to visit the INDIAN MUSEUM OF NORTH AMERICA ® at the Crazy Horse Memorial in the Black Hills of South Dakota to view and learn more about the Sherman collection. 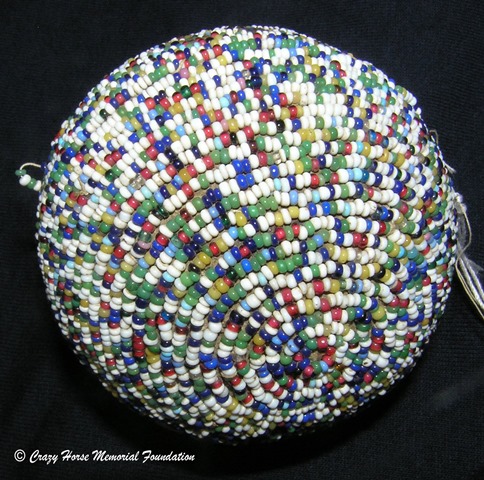