The celebrations honor the 67 Native American code talkers from South Dakota who helped win World War I and World War II by confusing the Germans with their Dakota/Lakota language. The celebrations feature a traveling exhibit “Honoring Native Pride and Spirit – Yesterday, Today and Forever” that honors the code talkers, their families and all veterans who served or are currently serving in the military.

“We wanted to do this because it helps integrate the Native American culture into the military,” said 1st Lt. Carstin Jerzak, SDNG state equal employment manager. “Our diversity council puts on programs or traveling exhibits like this one throughout the year to help provide inclusion and understanding of our different cultures among our service members in the South Dakota National Guard.”

The exhibit includes tribal flags and seven medallions honoring the Cheyenne River, Crow Creek, Oglala, Rosebud, Sisseton Wahpeton Oyate, Standing Rock and Yankton tribes. Another medallion, honoring the Lower Brule Tribe, is yet to be revealed as it is still being designed.

The Code Talkers Recognition Act of 2008 required the Secretary of the Treasury to strike Congressional Medals in recognition of the dedication and valor of Native American code talkers. “Under the Act, unique gold medals were crafted and pressed for each Native American tribe member who served as code talkers,” said Master Sgt. James Badwound, emcee of the event.

Badwound added that gold medals went to each tribe. Silver duplicates were presented to specific code talkers or their next of kin. In addition, bronze duplicates were made available for sale.

The keynote speaker for the event, Brig. Gen. Kevin Griese, assistant adjutant general for the South Dakota Army National Guard, spoke about the importance of the code talker’s role.

The United States first used Native American code talkers during World War I in October 1918 and it was a secret tactic up until 1968, said Griese.

“Native American code talkers had a unique capability that had a lasting impact on history,” said Griese. “It is an honor to help celebrate the long-overdue recognition they clearly deserved.”

“I am proud he did this for our country,” said Skyla Marks, Edmund’s granddaughter. “He kept this to himself and he never told us growing up. We found after he passed in the 90s. I am proud that he is being recognized for being a code talker and our whole community is proud and thankful for him.”

Ben Black Bear Jr., a member of the Rosebud Sioux Tribe, showed his appreciation for the ceremony by standing up and speaking on behalf of his father-in-law who served as a code talker.

“We Lakota are now part, fully part, of the nation,” said Black Bear. “We fought for the nation, and now we’re recognized as heroes.”

The exhibit will be open for public viewing from 10 a.m.–3 p.m. local time on each scheduled date along with an honor ceremony beginning at 11:11 a.m. The ceremony will include a featured speaker from the SDNG and highlight the service of code talker veterans and their families from all local tribes.

The exhibit tour will conclude with a special celebration on November 11/Veterans Day at Crazy Horse Memorial, which will include a blast honoring all veterans.

Crazy Horse Memorial is honored to be a part of this celebration and will have a production blast at 11:11 am, Wednesday, November 11, 2015 (weather permitting). 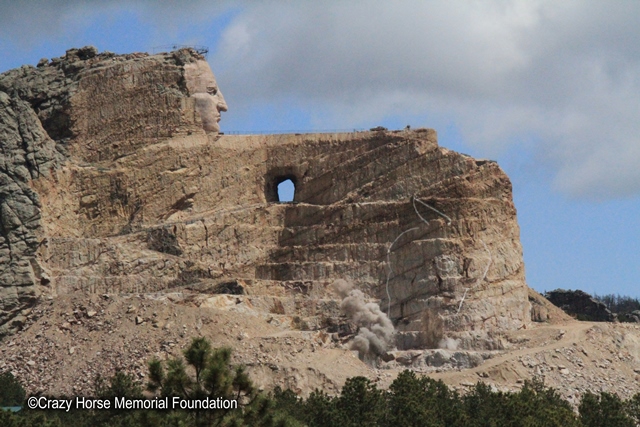