March 7th, 2022 – CUSTER, SD
CRAZY HORSE, S.D. – The Chairman of the Crazy Horse Memorial Foundation Board of Directors, Steve Helmers announced that the Executive Committee of the Board of Directors accepted the resignation of Dr. Laurie Becvar from the position of President/Chief Operating Officer effective February 22, 2022. Dr. Becvar will continue to serve the Foundation as an independent consultant, during a period of transition to new leadership at the Memorial.

Prior to her role with the Crazy Horse Memorial, Dr. Becvar served as the Chief Academic Officer at two private, nonprofit colleges and as the Dean of the Graduate School, Dean of the Division of Continuing and Distance Education, and as the Senior Associate Provost at the University of South Dakota. Her work with Crazy Horse Memorial Foundation began in 2008, when she worked with CEO Ruth Ziolkowski and the Board of Directors to plan the commencement of The Indian University of North America®. She joined the Memorial full-time as President/COO in 2013. The Indian University of North America® has since expanded to include both summer and fall academic programs in partnership with institutions of higher learning.
The Board and staff would like to extend their gratitude to Dr. Becvar for her service and commitment to the mission of Crazy Horse, and wish her the best in her future endeavors as she seeks her new leadership adventure.

Dr. Becvar stated, "Over eight and one half years, it has been an honor and privilege to be engaged with an organization that protects and preserves the culture, traditions, and living heritage of the Indigenous people of North America. To carry on the work of the Memorial's founders, Chief Henry Standing Bear, and Korczak and Ruth Ziolkowski, especially starting and advancing The Indian University of North America®, has been most meaningful and rewarding. Crazy Horse is a place of big dreams and big accomplishments and much has been accomplished with a great team and Board of Directors during my tenure. “ 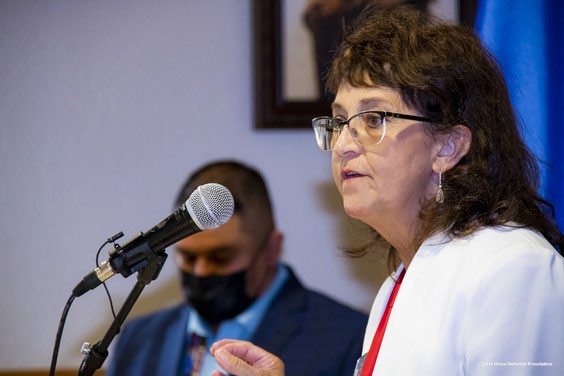