This spring, Crazy Horse Memorial® added 44 tribal flags to its displays in the Cultural Center and covered porch area, bringing the total number of flags on view to 138. While the Memorial has collected tribal nations’ flags for decades, this is first time they’ve all been available to the public.

Crazy Horse Memorial® started this special collection in 1982, when Oglala Sioux Tribe representatives presented their flag to Ruth Ziolkowski following the death of her husband, sculptor Korczak. In the years since, tribal members have contributed their own flags when they visit the Memorial, or they send the flags as soon as they return home.

“The Tribal Flags Collection has become an important part of the Memorial,” said Diana Welsh, collections manager for The Indian Museum of North America®. “Tribal representatives really appreciate this opportunity for prominent recognition, and for being part of our story. We receive 1.2 million visitors per year here, which puts tribal nations on a global stage.

“By placing their flags at our Memorial, they’re also expressing their support for our mission,” she continued. “They want to be part of that mission, and part of the conversation. When they visit and see their flags, there’s a huge emotional response. It’s very positive and powerful.”

Welsh was responsible for creating a guide to all the flags in the Cultural Center and covered porch. When visitors wish to see a particular flag, they may consult the guide and pinpoint the exact location of that flag. The Crazy Horse Memorial® staff also will share photos with tribal representatives if they cannot be on site when their flags are installed.

“The Seminole Nation of Oklahoma donated a flag, and we sent photos of their flag being installed,” Welsh recalled. “They sent letters to tell us how proud and happy they were, which meant a lot.”

Andrew Dunehoo, museum curator and director of cultural affairs, acknowledged the importance of Welsh’s role in bringing the full Tribal Flags Collection to the public this year.

“All the credit goes to Diana for making this possible,” he said. “The displays have such simple elegance. It took a tremendous amount of time to do it right, respecting people and forging meaningful connections. It’s really fantastic. We’re also thankful to the Cultural Center staff and maintenance team, who were such a huge help.”

Dunehoo also noted that the flag displays allow Crazy Horse Memorial® to acknowledge more tribal nations than the museum exhibits will allow. The average museum, according to the New York Times, is able to display 2 to 4 percent of its collections.

“We’re on the high end of that, but we’re still only scratching the surface,” he said. “Due to space limitations, it’s not feasible to show artifacts and items from every  nation. But we can display their flags, and receiving each one is such an honor. We’re deeply grateful to every nation that has entrusted a flag to us.

“With 138 in our collection, we still have a long way to go,” he added. “There are 574 federally recognized tribes in the United States, and there are Native nations in Canada, Mexico, and Central America. They are all welcome here, because Crazy Horse Memorial represents all tribes, and we are dedicated to raising public awareness of the rich diversity of Native American tribal heritage across our continent.”

Tribal representatives and donors who are interested in contributing a flag to Crazy Horse Memorial’s Tribal Flags Collection may contact Diana Welsh, collections manager, at (605) 673-4681 for more information. 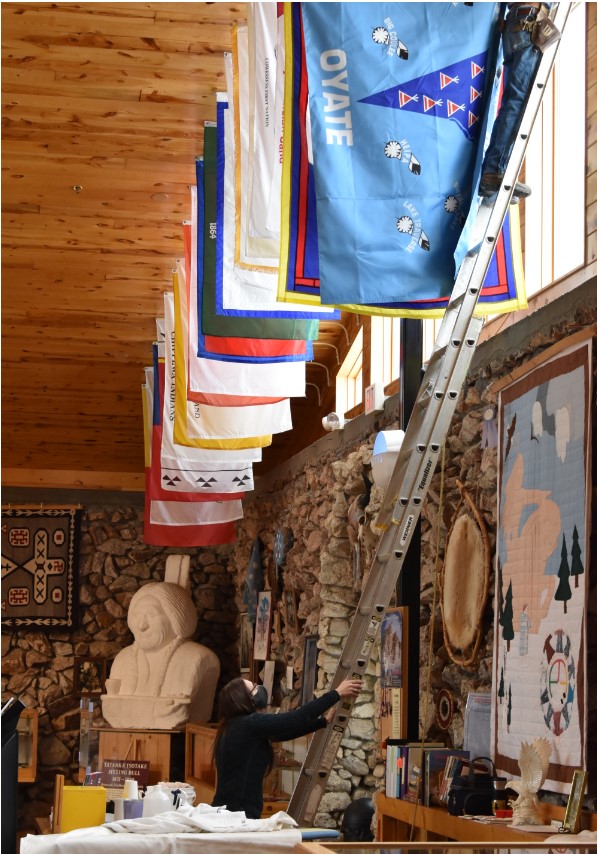